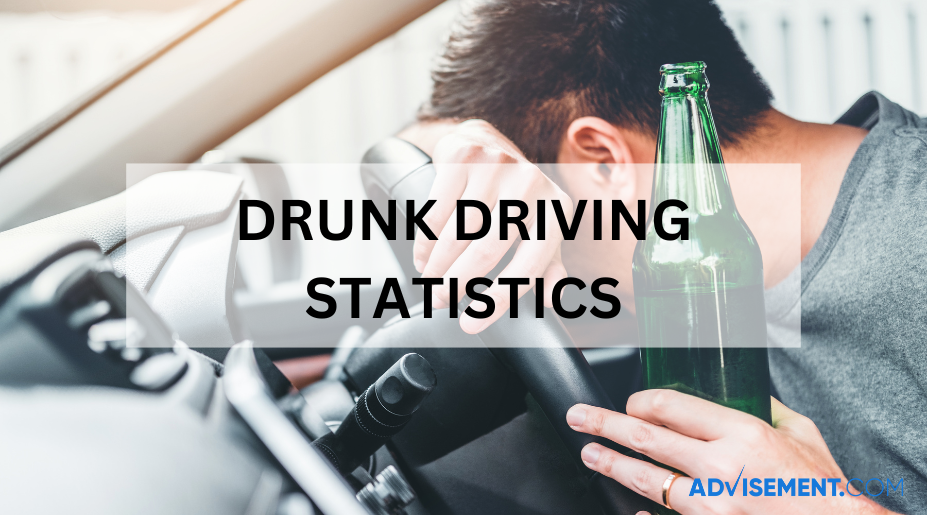 According to statistics, 1 in 3 traffic fatalities in the United States happens as a result of drunk driving. This ratio may vary depending on the state, the age of the driver, and the time of year.

This article has compiled the most up-to-date drunk driving data and statistics from sources including the National Highway Traffic Safety Administration (NHTSA), the Center for Disease Control and Prevention, the National Safety Council, and the National Institute of Health.

How many people die from drunk driving? 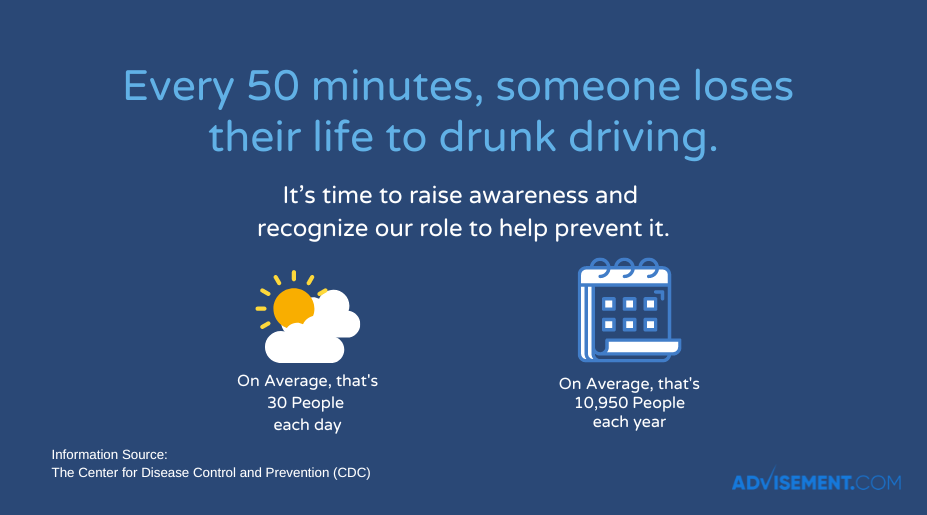 The following information is based on data available from the National Highway Traffic Safety Administration (NHTSA), the Center for Disease Control and Prevention (CDC), and a 2020 survey conducted by TheZebra.com

The NHTSA on the other hand shows that the number of drunk driving-related deaths has dropped over the last 18 years. This was due to the number of accidents dropping by 14% (mainly because of alcohol prevention laws and the increasing popularity of lift-sharing).

Since 2004, there has been an 18% drop in the number of people that lost their lives due to drunk driving. Even though there has been a 7% increase in deaths from 2011 to 2018, the number has still dropped significantly when compared to the past two decades.

A survey conducted by a car insurance website, revealed some interesting statistics when it came to human behavioral patterns and beliefs regarding drunk driving. The study took into question around 1500 drivers of all ages. The 2020 study revealed:

The following information is based on data available from the National Highway Traffic Safety Administration, the National Institute of Health, and the National Safety Council.

Between the years 2004 and 2018, there have been 168,744 registered deaths that were caused due to drunk driving. This number covers 30% of all car accident deaths occurring in that period. 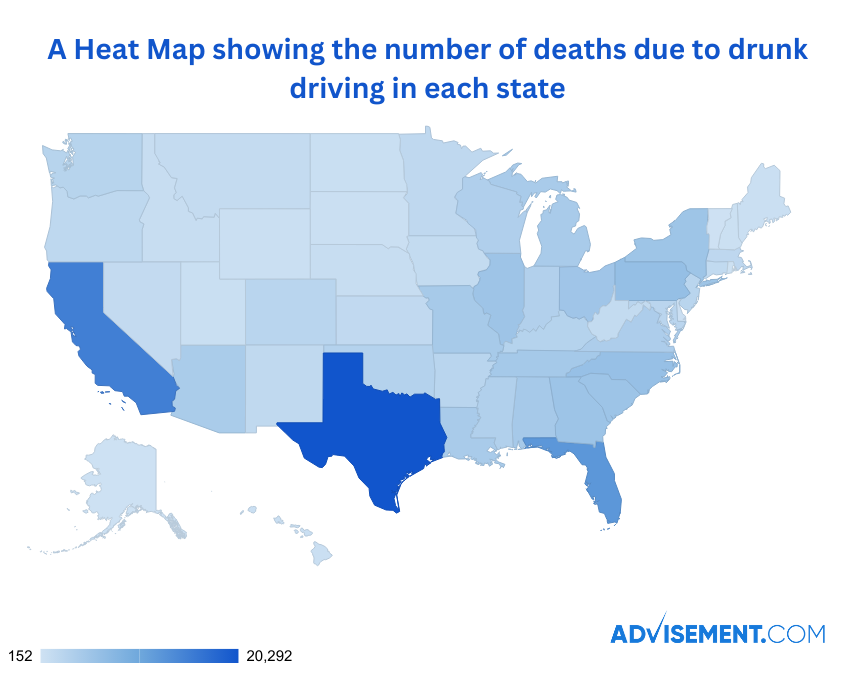 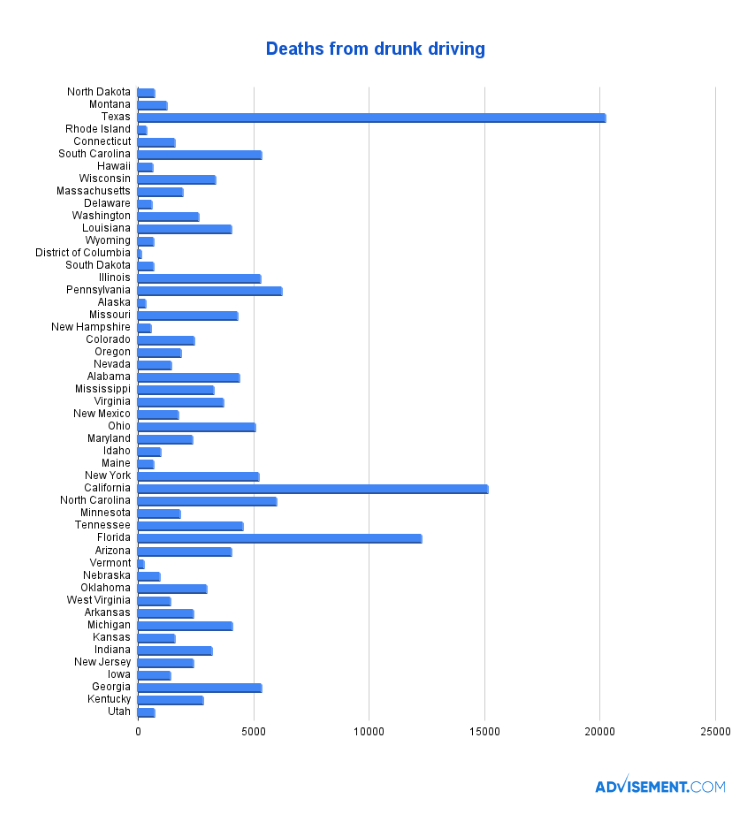 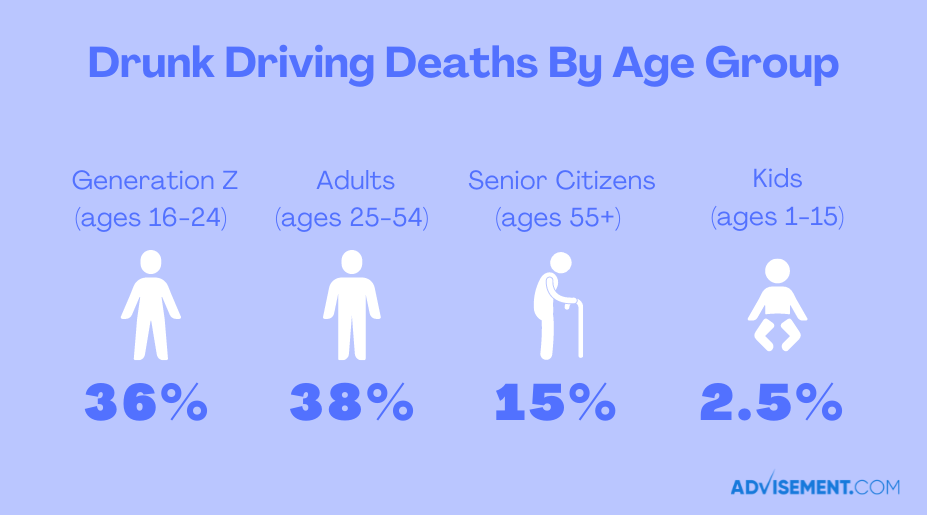 The information in this text is based on NHTSA’s Traffic Safety Facts and the Department of Transportation:

Generation Z (ages 16-24) is the most vulnerable generation to get killed in a car accident caused by drunk driving. This generation makes up 36% of alcohol-impaired driving deaths in the U.S.

While 38% of deaths resulted from people aged 25 – 54. This is a much larger demographic than the one described previously, which is why it has resulted in a higher percentage number. When it comes to the older generations, alcohol-impaired deaths were lesser in number, taking up only 15% of all drunk driving deaths. The same goes for people ages 15 or younger, who make up roughly 2.5% of drunk driving deaths.

Q: Is drunk driving a felony?

A: No.Drunk driving is not a felony but it is a misdemeanor. The penalty of getting caught does not lead to jail time but often results in a fine or community service. The only time drunk driving is considered a felony is when the person is responsible for killing another person while driving under the influence or drunk driving without a license while having a minor in the car.

Q: Which gender is more prone to drive under the influence of alcohol?

A: According to NHTSA, men are overall more likely to drive drunk. Men are 4 times more likely than women to get involved in a car accident while drunk. Men also account for 80% of all traffic fatalities caused by drunk driving.

Q: Which holidays have the most drunk-driving accidents?

A: Over the past two decades, there were more drunk driving accidents during the 4th of July and Thanksgiving than there were on any other holiday. Around 40% of all holiday accidents occurred on these two specific holidays.

A: Getting a DUI might increase insurance. For the U.S’s 10 largest states, insurance may increase by $3,500 after being convicted of a DUI. This results in a 123% increase in the average cost of insurance.

Most statistics are truly alarming, but the good news is that drunk driving deaths are dropping considering the rapid growth of the population. For years the battle with alcoholism has been viewed as hopeless by many people.

However, in recent times, we have seen great strides taken in awareness and education of alcoholism and substance abuse which has significantly helped in reducing drunk driving accidents and deaths!