Most Dangerous Holidays for Drunk Driving 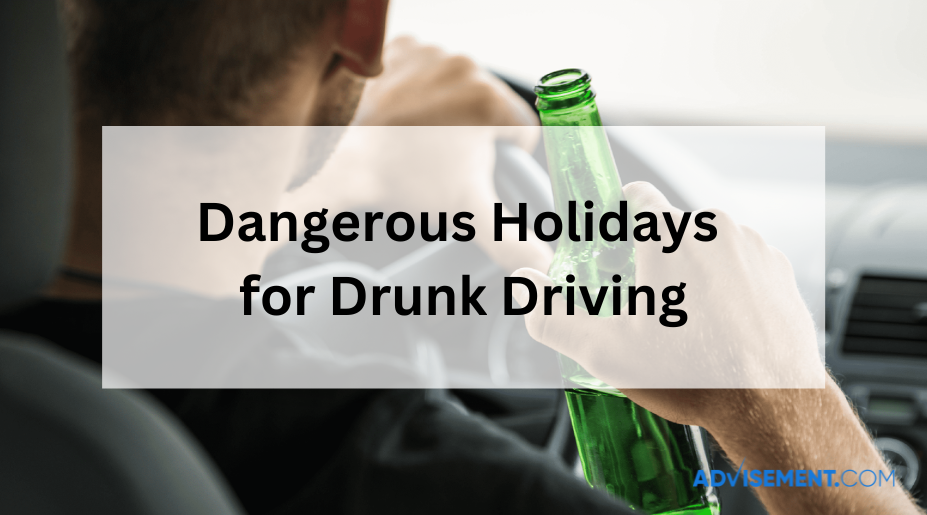 Statistics show that one of the most dangerous times for drivers is the week between Christmas and New Year’s Day. One of the main reasons for this is alcohol usage.

To have a better understanding of drunk driving trends during the holiday, this article has analyzed the most recent data from the Fatality and Injury Reporting System and the National Highway Traffic Safety Administration. The data that is gathered has focused mostly on drivers that had their alcohol content above the legal limit (0.08). 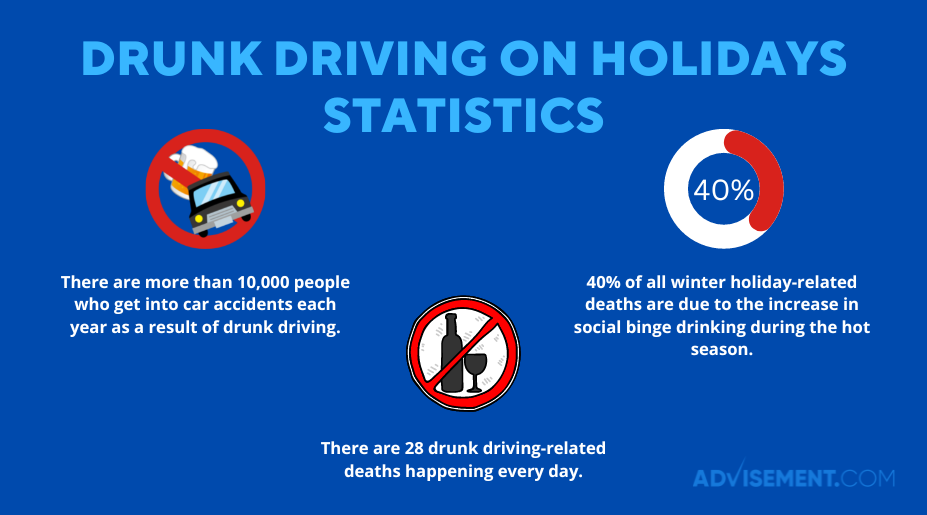 There are more than 10,000 people who get into car accidents each year as a result of drunk driving. Around 40% of all winter holiday-related deaths are a result of alcohol. Summer holidays on the other hand also see a spike in deadly car accidents and DUIs. Holidays such as Memorial Day and Labor Day seem to be the most dangerous summer holidays. This is mostly due to the increase in social binge drinking during the hot season.

A lot of effort has been made against drunk driving over the last decades. This has resulted in a 50% decrease in drunk driving between 1980 and 2020. Yet, even after such a drastic drop, there are 28 drunk driving-related deaths happening every day. That number drastically increases on holidays.

Drunk driving fatalities that happen during the holidays have become more predictable with each passing year. Montana holds first place for the most alcohol-related deaths during the holiday periods. This is followed by South Carolina and New Mexico. 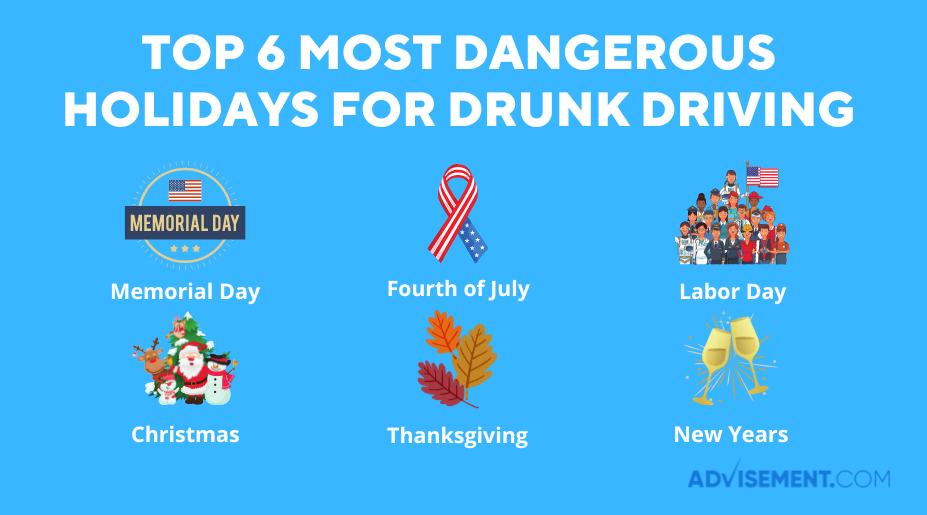 The deadliest holiday was Labor Day according to 2020 statistics. Memorial Day was ranked the deadliest in 2019. New Year’s Eve, on the other hand, had the highest number of alcohol-related traffic accidents. According to FARS statistics, states that are more populated tend to have the highest number of vehicle fatalities that involve alcohol. Smaller states, however, showed that there were more alcohol-related fatalities per capita during holiday periods.

Americans celebrate Memorial Day every year on the last Sunday in May. Memorial Day was listed as the 6th most dangerous holiday for drunk driving. Around 40% of all fatal car crashes during this holiday were as a result of alcohol.

Out of all the states, Wyoming had the most drunk driving fatalities per capita on Memorial Day in 2019. This was followed by Vermont and Louisiana. During the same year, a total of 158 people throughout the entire country lost their lives on this holiday because of drunk driving.

Fourth of July also remains one of the most dangerous holidays for drunk driving in the U.S. A total of 812 people died on this holiday due to alcohol-related car accidents over a period of five years between 2014 and 2018. These numbers made the Fourth of July one of the deadliest days to drink and drive each year.

Washington D.C. had the highest number of alcohol-related fatalities per capita. This was followed by South Dakota and Delaware. In 2019, a total of 67 people lost their lives on this holiday due to alcohol-related accidents.

Being a celebration for the end of summer, Labor Day is the most deadly holiday in the U.S. This is mostly due to the partying and social binge drinking that continues well off into the weekend.

Montana had the highest alcohol-related fatal car accidents on this holiday in 2019. This was followed by Wyoming and North Dakota. According to the National Safety Council, 456 people are thought to have died on Labor Day in 2022 alone. The number of alcohol-related fatalities, however, still remains unclear for this year.

Christmas holiday parties cause adults to drink 16% more than they usually do. This then leads to devastating outcomes when on the wheel. New Mexico, Louisiana, and Alaska were the top three U.S. states with the highest number of fatalities as a result of alcohol on this holiday. A total of 140 people lost their lives due to fatal car accidents that involved drunk driving on Christmas Day in 2019.

Thanksgiving is the most traveled holiday in the U.S. It is also one of the busiest nights for bars the day before the holiday, also known as Blackout Wednesday. This is a time when most adults go out with family and friends over a drink. The alcohol consumption the night before Thanksgiving makes it one of the most dangerous holidays for drunk driving.

Montana, South Dakota, and Delaware have the most alcohol-related Thanksgiving fatal accidents per capita. In 2019, a total of 127 people were killed because of drunk driving fatalities over this holiday.

New Year’s Eve and New Year’s Day both rank number one for the most vehicle fatalities that happen as a result of drunk driving. This holiday, however, is not the deadliest when compared to other holidays like Labor Day or Memorial Day. Because of cold temperatures, drivers are more aware of the road. Another factor that makes drivers more aware is the police patrol that is out during this time. New Year’s has more surveillance for drunk driving than any other holiday.

Though this list may be a little simplistic, it does make the point that no matter what day or time of year it is, you should always be careful to avoid driving under the influence. This valuable message can help save lives and hopefully prevent some needless deaths from drunk-driving accidents.