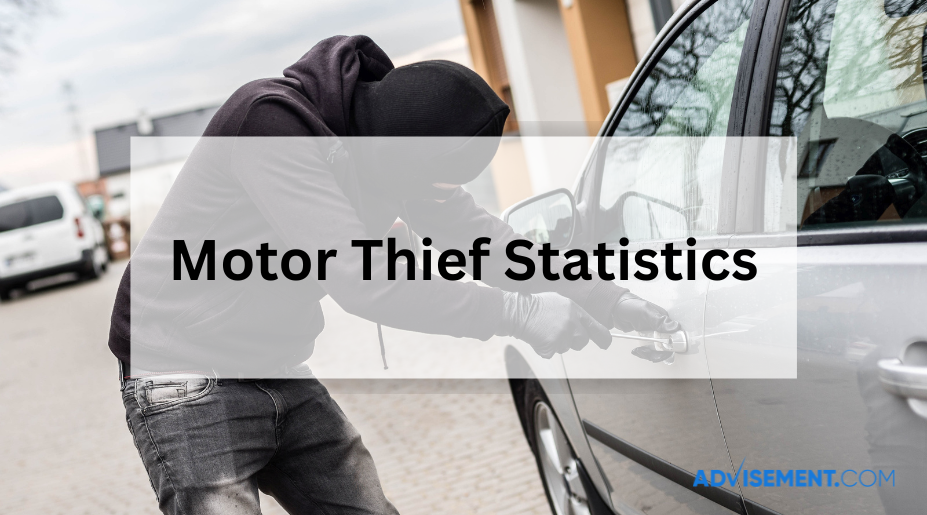 The following analysis was created using different databases and sources. This includes the National Insurance Crime Bureau, the Insurance Information Institute, and the Federal Bureau of Investigation.

How Many Vehicles Are Stolen Each Year? 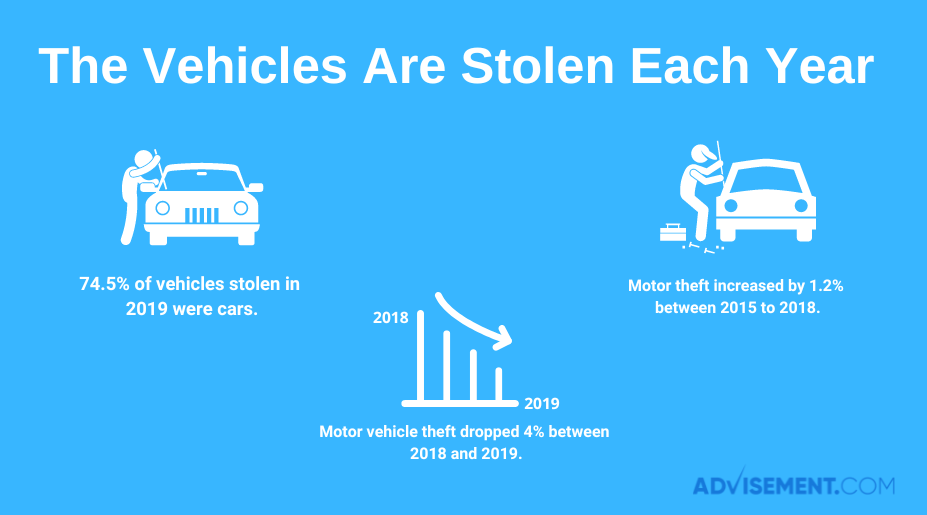 According to data released from the FBI, 2020 saw a spike in car theft rates. About 810,400 vehicles were stolen. This was 11.5% higher when compared to the 721,885 vehicles that were stolen in 2019. The methods used in stealing vehicles have changed a lot over the last few years. As technology advances, the way thieves steal vehicles has become more sophisticated.

Some methods require changing a car’s VIN or the usage of smart keys to succeed in a theft. A big factor that increases the chances of vehicle theft is vehicle negligence from the owner. Between 2017 and 2019 there were about 244,845 vehicles that were stolen only because the key fob of the vehicle was left inside it by the owner. This number has been on the rise when compared to the 230,000 vehicles stolen for this same reason from 2016 to 2018.

Below are some key points of motor thief statistics over the years:

Motor Thief Statistics Over The Years

Motor thief rates have dropped by 52% over the past two decades. In 1991, the number of stolen vehicles went over 1.5 million. This is less than the average 730,000 vehicles stolen annually in recent years.

The main reason why motor thief rates have been cut in half has to do with the advancement of technology that cars are built with today. This makes it more challenging for thieves to access and steal. Law enforcement has also increased its focus on vehicle theft to try to prevent it from happening.

The total number of vehicle theft in the U.S during each year 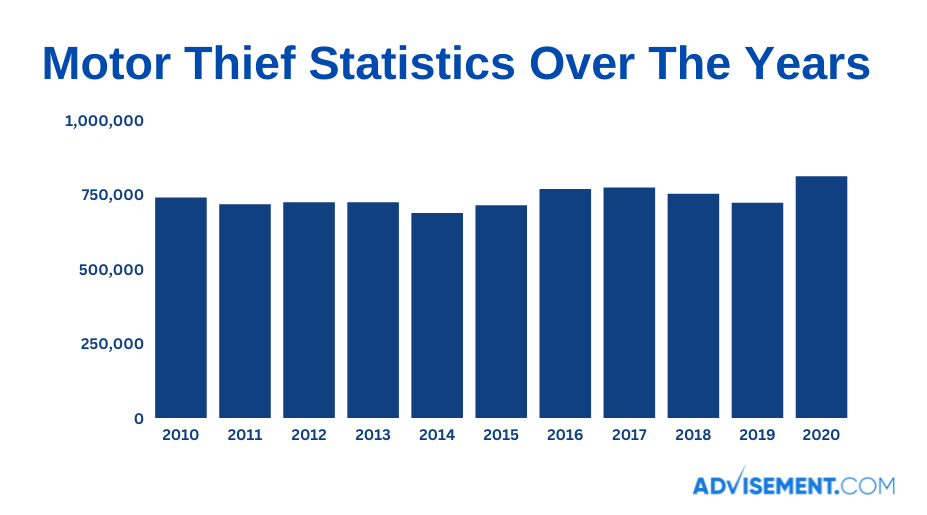 When adjusted for inhabitants, California had 42.8 vehicle thefts per 10,000 residents, which is still 10 times higher than Vermont. Statistics show that population and vehicle ownership do not play a role in these numbers. In fact, Vermont has 97 registered vehicles per 100 people, which is more than California, which has 77 registered vehicles per 100 people. 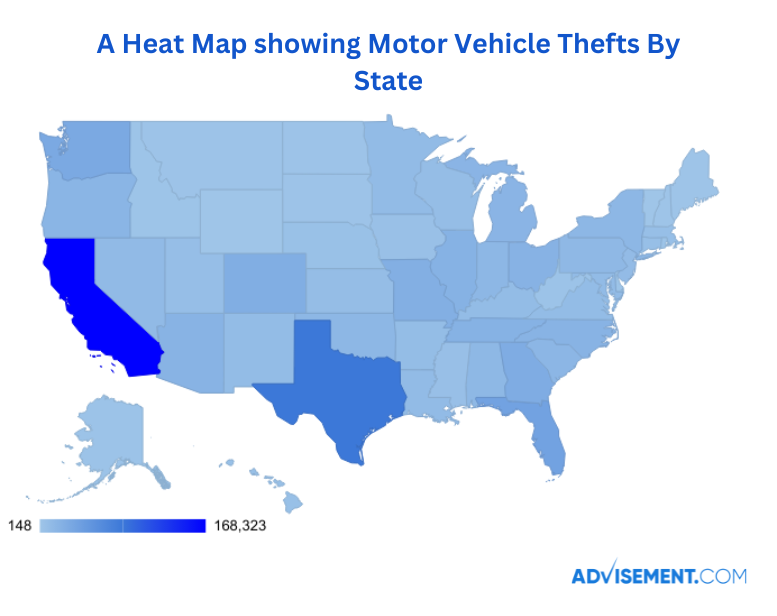 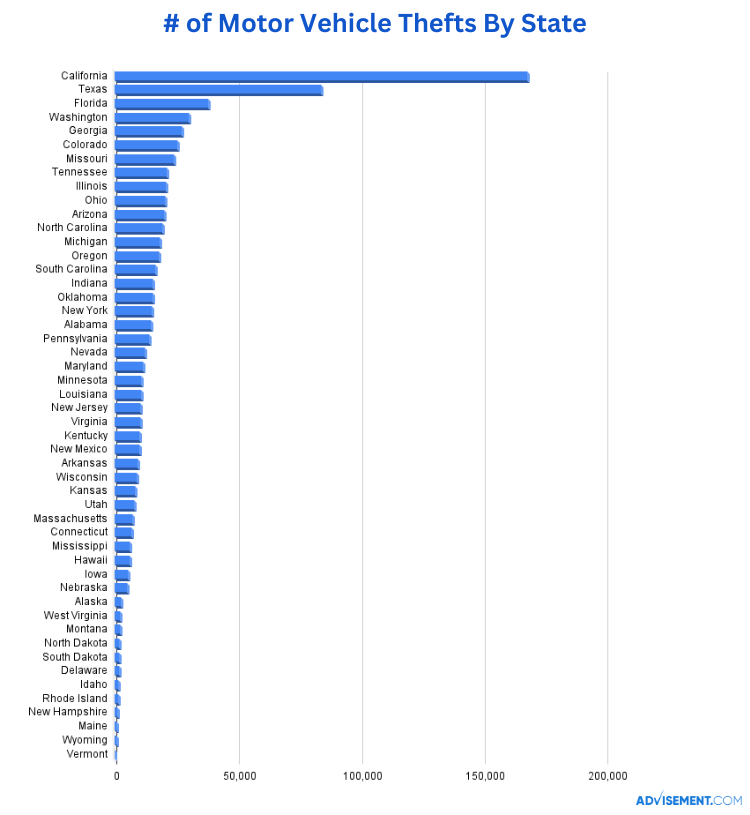 Motor theft can happen anywhere in the country, but chances remain higher in more populated areas. Metropolitan areas have the highest motor vehicle theft rates in the region when compared to the outer city and rural areas. 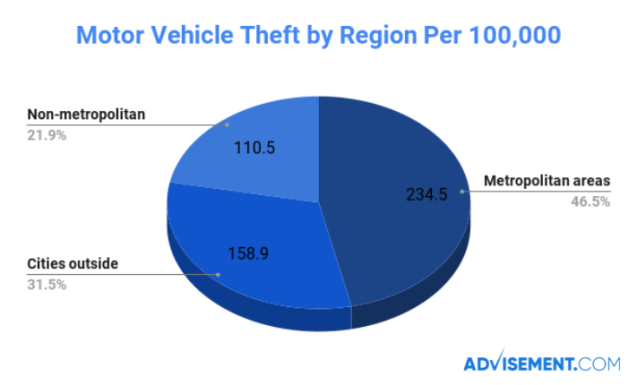 Regions also impact motor vehicle rates. Since the Western and Southern regions have the highest crime rates overall, they also experience the highest rate of auto theft in the U.S. Areas such as the Northeast and the Midwest have shown to be the safest regions when it comes to vehicle theft and crime rates in general.

The statistics below show the top 10 metropolitan areas with the highest numbers of auto theft in America:

Holidays Ranked by the Number of Vehicle Thefts

The most popular holiday for car theft in 2020 was New Year’s Day, with a total of 2,320 motor vehicles stolen. According to statistics, the reason for this is because people are more likely to leave their cars in parking lots for prolonged hours on New Year’s Day. This makes it easier for thieves to take their time getting in the vehicle and driving off without getting caught. 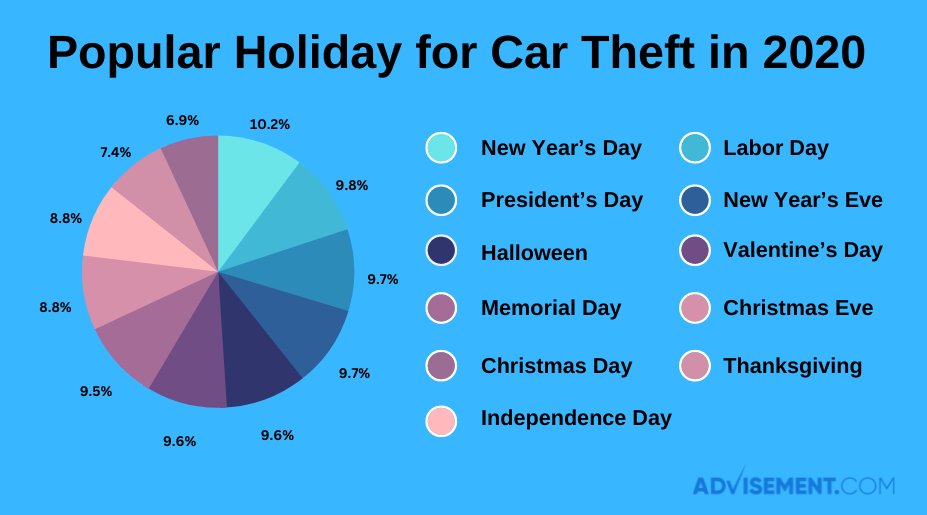 How often does motor theft occur?

A vehicle is stolen every 43.8 seconds in the U.S. According to the National Insurance Crime Bureau, a vehicle was stolen every 36 seconds in 2020, which was the highest rate in the past 9 years.

Which is the most stolen car model?

What color car is the least stolen?

Bold colors were the least likely to be stolen mainly because they are easily detectable. Cars with colors such as orange, red, and yellow are thought to be younger models with better security systems, which unmotivates the thieves to take risks.

The United States is ranked among the top nations for vehicle theft. Of course, this may not come as a surprise if you live in one of the top states for car thefts.

The numbers are quite startling in many cases, but they also tell us which vehicles are at the greatest risk of being stolen, and how we can protect them. It’s information that we can all use to help stop auto theft and make our country a safer place to drive.