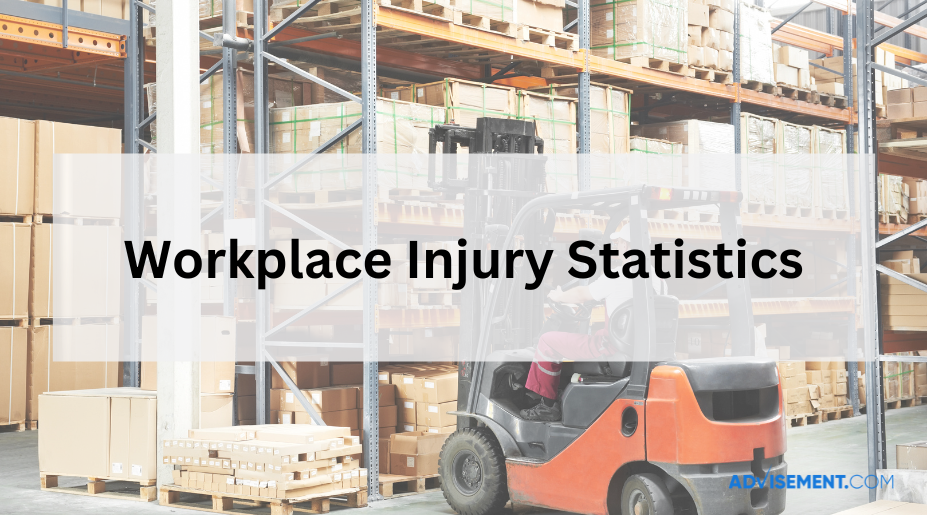 An average of 2.8 workers out of 100 get injured every year in workplace accidents in the U.S. This costs the U.S around $250 billion each year. In 2019, there were 2.8 million injuries and nonfatal workplace accidents according to the U.S. Bureau of Labor Statistics. This number, however, has been on a downward trend in the last decade.

The workplace injury statistics in this article are taken from authorized databases including the National Safety Council, the Bureau of Labor Statistics, and the Occupational Safety and Health Administration.

How Common are Workplace Injuries? 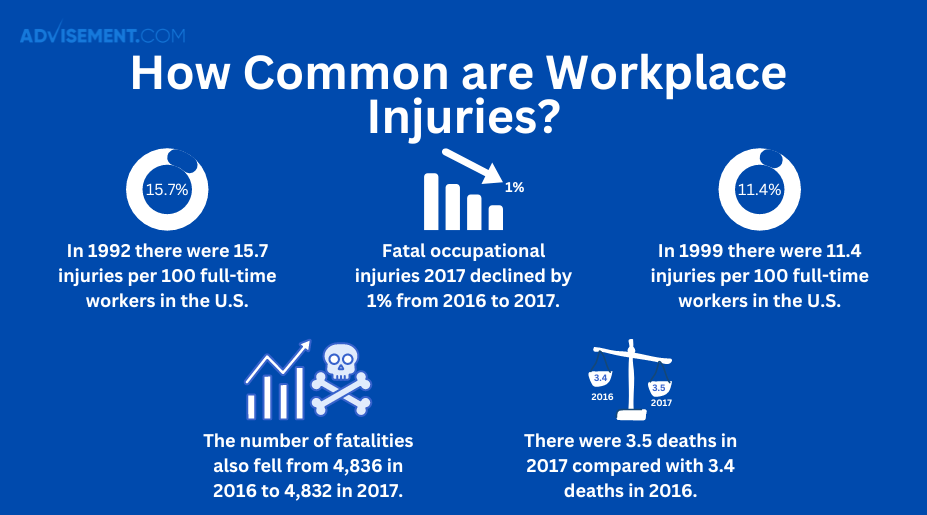 In 1992 there were 15.7 injuries per 100 full-time workers in the U.S.; that number dropped to 11.4 by 1999, which is when the BLS began tracking it separately from nonfatal occupational illnesses and illnesses caused by exposure to toxic substances or ionizing radiation (which are now tracked under another category).

According to the BLS, there were 4,585 fatal occupational injuries in 2015 — the lowest number since record-keeping began in 1992. Fatal injuries in the private industry declined by 6 percent from 2014 to 2015. 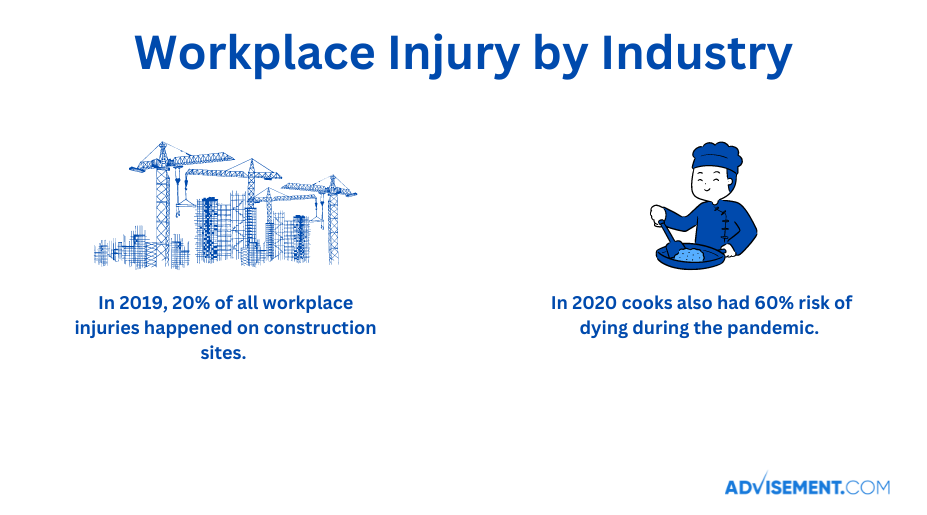 In 2019, 5333 workers died during their job. This breaks down to 15 work-related deaths happening each day across the United States. This means that an average of 3 construction workers lost their lives every day of the year.

Line cooks, on the other hand, have the highest chances of falling ill on the job. According to a study held by the University of California, San Francisco, cooks are the most likely to contract a contagious virus in their workplace.

In 2020 cooks also had the highest risk of dying during the pandemic. The study also revealed that the mortality rate for cooks increased by 60% when the pandemic reached its peak. Workers who are also at risk of contracting a contagious virus are bakers, construction workers, agricultural workers, and those who work in warehouses. 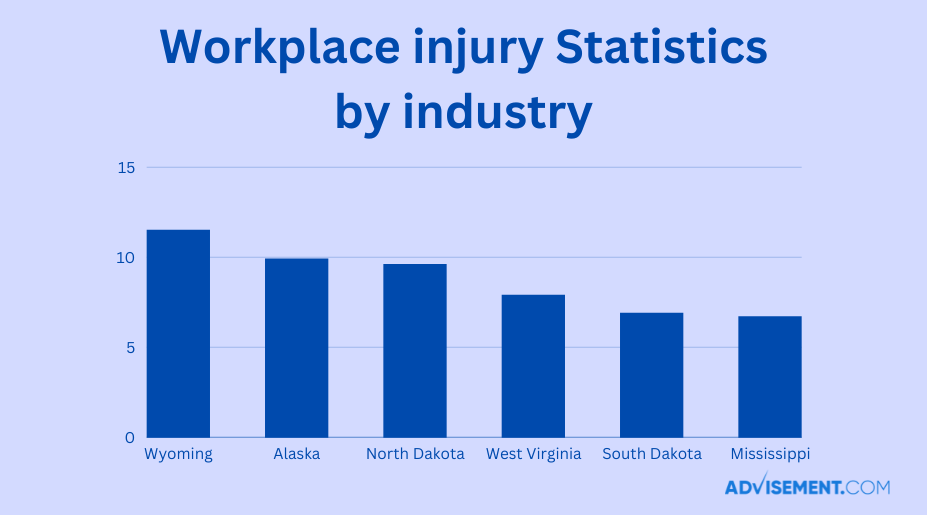 In 2016, The State of California had the highest number of non-fatal lost-time cases for private industry workers with an incidence rate of 3.6 cases per 100 full-time workers.

States that have the highest rates per 100,000 employees include:

Georgia, Delaware, and Arkansas are considered the top three safest states to work in as of 2019. Other states that have a low workplace injury rate include New York, New Jersey, Louisiana, Ohio, Massachusetts, North Carolina, South Carolina, Virginia, and Texas.

The BLS estimates that the average cost per case for a non-fatal injury is $17,300 per person in medical expenses, lost wages, or reduced quality of life. Safety experts say many workplace injuries could be prevented if employers followed basic safety rules and provided proper training to their employees.

Here are some of the common causes of workplace injuries:

Slips, trips, and falls – According to OSHA data, slips and falls account for more than 25 percent of all fatalities in the workplace; most slip-and-fall deaths occur when workers fall from ladders or stairs. Falls are also one of the leading causes of traumatic brain injuries, which can result in permanent disability or death for workers who suffer them. In fact, TBIs account for about 20 percent of all workplace fatalities each year according to OSHA data; this makes TBIs one of the leading causes of death from workplace injury overall among all industries.

Back and neck injuries – These account for about 38 percent of all workplace injuries, according to the Bureau of Labor Statistics. The most common cause of these injuries is overexertion, which can result from lifting heavy objects or performing repetitive motions. About 2 million Americans suffer from a back injury every year. Many businesses offer ergonomic training to help prevent back injuries and reduce the risks associated with them.

Contact with objects or equipment (struck-by) – Objects striking workers accounted for about one-third of all non-fatal workplace injuries in 2016, according to BLS data reported by The Wall Street Journal This type of injury occurs when a worker is struck by something moving at high speed, such as a heavy object falling from above or an object thrown across the room during manufacturing processes. Workers may also be struck by falling objects if their eyes are not protected by goggles or other devices designed for this purpose.

The number of days injuries cause workers to miss

The average number of days injuries cause workers to miss is 2.6 days, according to the Bureau of Labor Statistics. That’s down from an average of 3.5 days in 1990.

Injuries are a leading cause of lost work time in the United States, accounting for more than $80 billion in lost productivity annually. Injuries are also costly for employers in terms of medical expenses, lost wages, and replacement costs for temporary employees.

Workers compensation insurance helps pay for medical care and lost wages when employees are injured on the job.

Considering their massive impact on the economy and their prevalence in nearly every workplace, there’s still room for improvement, especially in dangerous occupations. The trends might be moving in a positive direction, but employers can still do more to better protect their employees.

There are many workplace hazards to be aware of, but workplace injuries occur less frequently. Safety rules and regulations are in place to minimize the risks of injury, but they are not always completely effective. It helps to follow the rules and work safely.