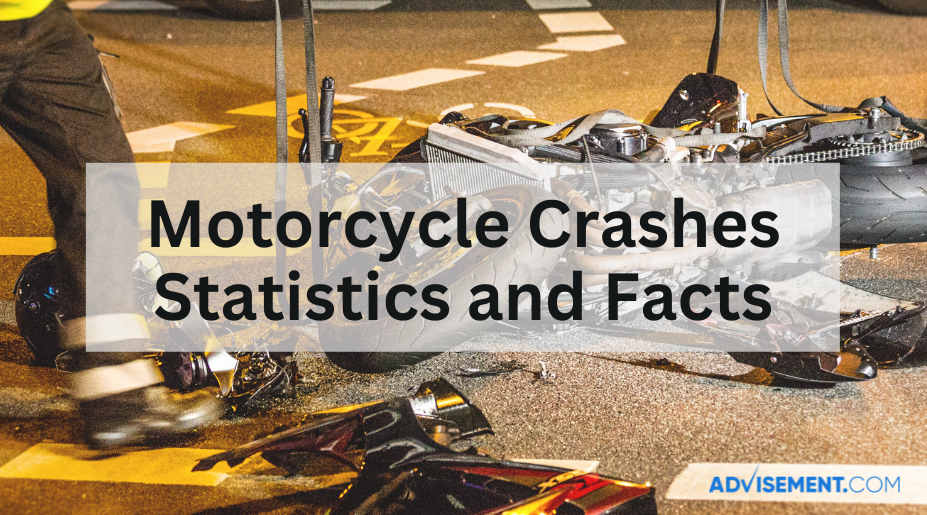 More than 5,500 motorcyclists were killed in 2020 alone. This was 11% higher than the year prior and the highest ever recorded in a decade. Almost 14% of all vehicle deaths are motorcycle deaths.

How dangerous is driving a motorcycle? 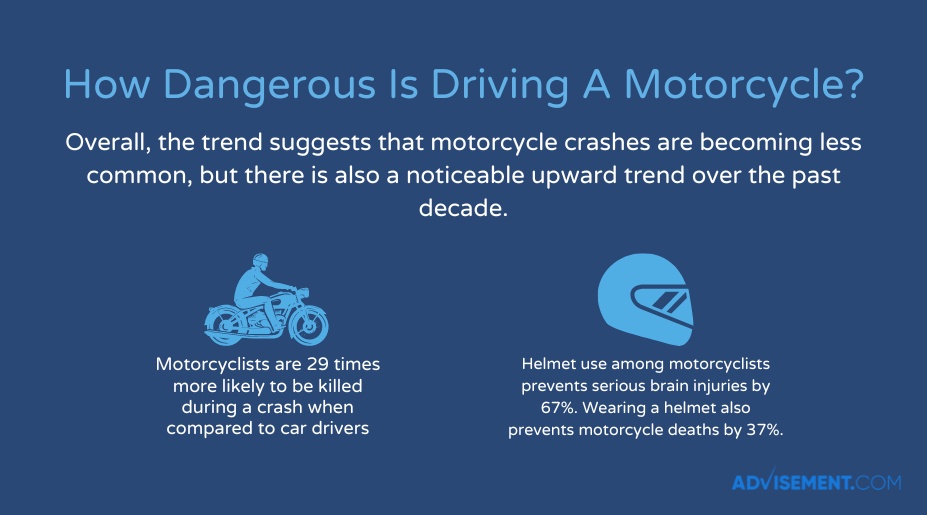 Motorcycles have higher performance capabilities when compared to most vehicles. What makes them dangerous is that they lack both stability and visibility when compared to cars. Motorcyclists are more at risk than other motor vehicle drivers because they lack the protection and security of an enclosed vehicle.

Helmet use among motorcyclists prevents serious brain injuries by 67%. Wearing a helmet also prevents motorcycle deaths by 37%. Out of 50 states, only 18 U.S. states require using a helmet by law when driving a motorcycle.

Overall, the trend suggests that motorcycle crashes are becoming less common, but there is also a noticeable upward trend over the past decade. Whether this is a result of increasing roads and traffic, or if other factors are at play is unknown. 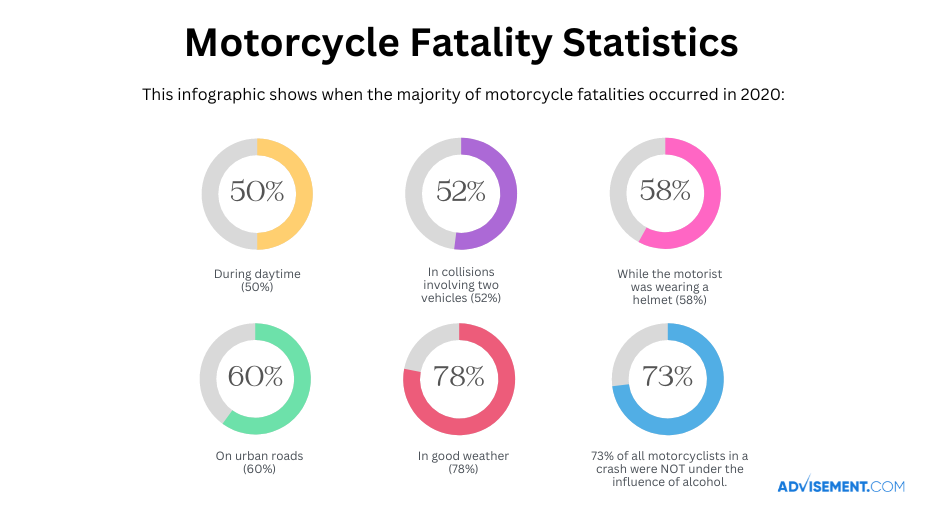 Motorcycles make up only 3% of all registered vehicles. In 2020, motorcycle accidents were responsible for 18% of all traffic fatalities and 4% of all driver injuries.

Motorcycle deaths have more than doubled in 2020 when compared to 10 years ago while traffic fatalities have increased by 20%. According to the National Highway Traffic Safety Administration, the current rate of motorcycle fatalities stands at 31.6 for every 100 million vehicle miles driven in the U.S. Also, drunk motorcyclists had the highest rates of crashing and getting killed when compared to drunk drivers driving any other vehicle.

Motorcycles have risen in popularity over the past 13 years (between 2007 and 2020). Even though registered motorcycles have increased by 17%, the number of miles driven has dropped to 18% during this period.

In recent years, the number of miles driven by motorcycles has dropped at a slower pace by 5% since 2017. Although there has been a drop, fatality rates have still been on the rise.

This infographic shows when the majority of motorcycle fatalities occurred in 2020:

Motorcycle fatalities by age and gender

According to 2020 statistics, the age for the most motorcycle fatalities is 25-27 years old for both men and women. In second place comes 60-69-year-olds only including men.

In contrast, quite the opposite has happened with motorcycle accidents with drivers 30 or younger. The fatality rate for the younger generation was 80% in 1975 and dropped to 26% in 2020.

About 92% of passengers that are killed during a motorcycle crash are women. While men are the most likely to get killed in a motorcycle accident while being the driver. 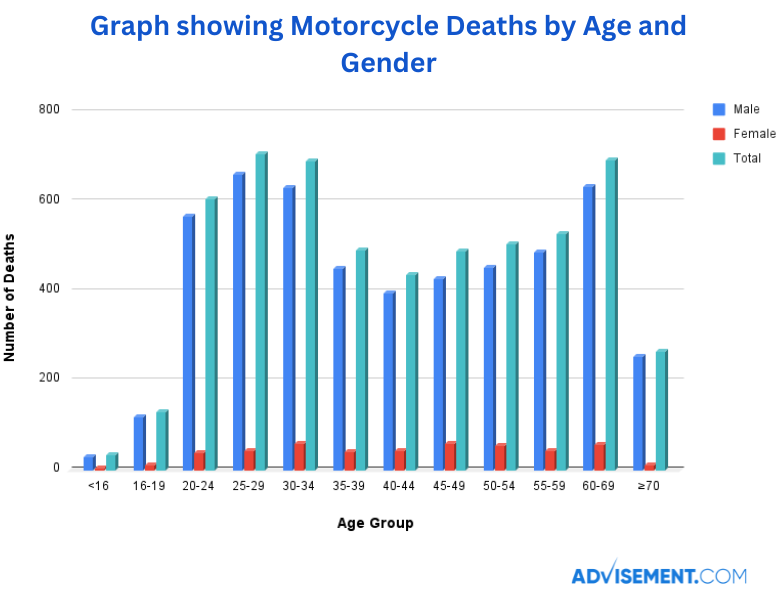 Time of day and of the month of motorcycle fatalities

Overall, however, these trends don’t appear to make much of a difference in terms of your likelihood of dying in an accident. 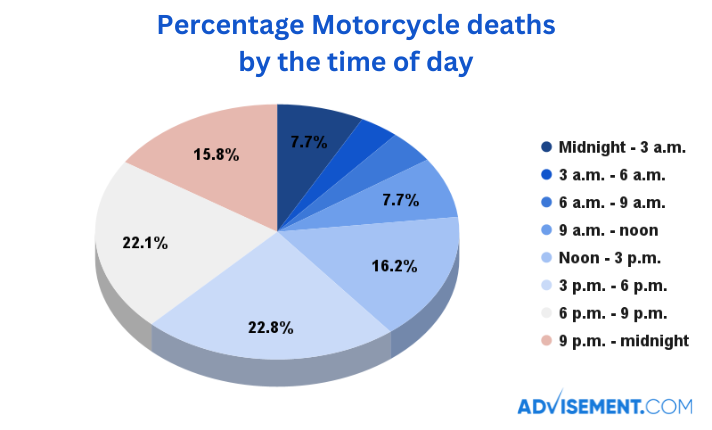 Motorcycle deaths by the time of the month (2020): 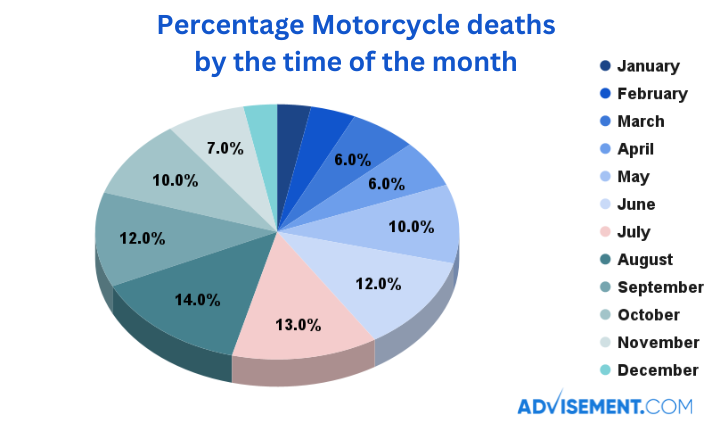 All in all, motorcycles are much more dangerous than cars, even when riders take sensible precautions to make themselves safe on the road. It’s up to riders to protect themselves and be aware of unpredictable drivers and road conditions that can send motorists into a tailspin.

Risks will always abound, however, so people should know about these dangers so that they may make informed decisions about whether or not riding a motorcycle is a good idea.